Astronomy If there are infinite stars, why is the sky dark at night?

If there are infinite stars, why is the sky dark at night?

The paradox in action – Image by Kmarina86

Go outside tonight and look up into the sky. What do you see?

A bunch of bright points in the sky: the light from far away stars (unless you’re in Britain, in that case the sky will probably be cloudy). But most of the sky is dark.

Even if you go somewhere with very little light pollution (like the middle of the Sahara desert, for example) the sky will be dark. Sure, you’d be able to see more stars more clearly and observe the milky way in all its glory but the sky will definitely not  be as bright as it is when the sun is up.

Which gives us a paradox. After all, aren’t there infinite stars? If stars are infinite shouldn’t any sight line from the earth end at a star? Clearly, they do not. Why?

The paradox of the dark night sky is named after Heinrich Olbers, a german astronomer from the 19th century, though he was not the first one to discuss it (it’s another example of Stigler’s law which says that “No scientific discovery is named after its original discoverer”; Stigler claims that the discoverer of this law was sociologist Robert K. Merton, thus making Stigler’s law an example of itself, but I digress).

Let’s get back to the paradox. Stars further away from the earth will be less bright than closer stars, but there will also be more of them. In fact, the paradox suggests that the photons from the infinite amount of stars would add up and the night sky should be as bright as the surface of the sun.

Olbers’ suggested a solution: he proposed that clouds of dust would get in the way of the light and keep it from reaching the earth. However, in the long term these clouds would absorb the light from the stars behind them and eventually be as bright as those stars. So clearly, this is not the right answer. 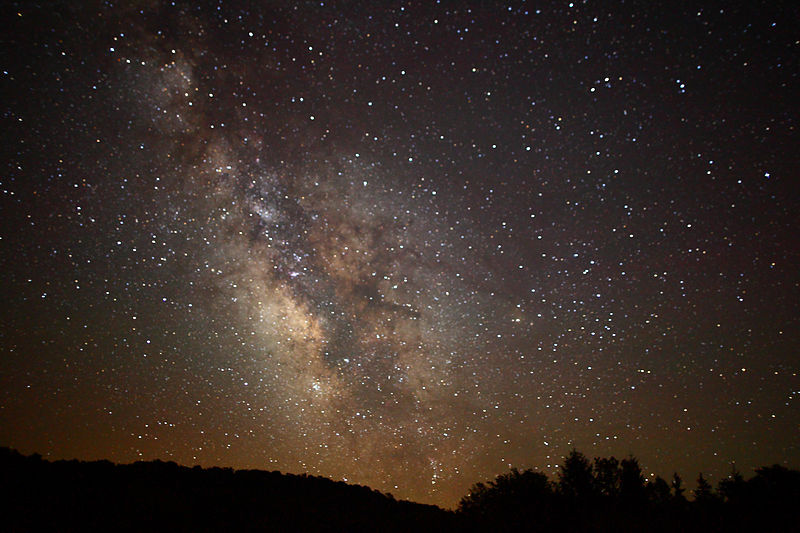 Centre of the Milky Way – Photo by Forest Wander

Another solution is that there is not an infinite amount of stars. This could be true. But there are so many stars anyway, that for the purposes of lighting up the night sky, the stars are effectively infinite.

In fact, there are two accepted reasons for why the night sky is dark.

First of all, the universe is young (only astronomers can get away with saying that something that is over 13 billion years old is young).

Light travels at, well, the speed of light. Since the universe has been around for only a dozen or so billion years, the light from stars which are further away than 13.8 billion light-years from the earth just hasn’t had the time to reach us yet. The universe might be infinite, but the observable universe is finite: it is limited by the time which has passed since the big bang and this time is finite. The observable universe is a shell whose radius is equal to the time since the beginning of time (the big bang).

The second reason is that the universe is not static. It is expanding. As the universe expands the light from stars gets redshifted (an example of the Doppler effect). As stars move away from us, the wavelength of the light emitted increases (and the frequency decreases) into the red part of the light spectrum (much like the siren of an ambulance gets deeper as it moves away). The redshift decreases the intensity of the light.

Somewhat surprisingly, the prediction that the finiteness of the observable universe is one of the reasons why the sky is dark at night was made by, of all people, poet Edgar Allan Poe who wrote in his 1848 essay Eureka:

Were the succession of stars endless, then the background of the sky would present us a uniform luminosity, like that displayed by the Galaxy – since there could be absolutely no point, in all that background, at which would not exist a star. The only mode, therefore, in which, under such a state of affairs, we could comprehend the voids which our telescopes find in innumerable directions, would be by supposing the distance of the invisible background so immense that no ray from it has yet been able to reach us at all.