Blog post Whatever happened to the hole in the ozone layer?

Whatever happened to the hole in the ozone layer? 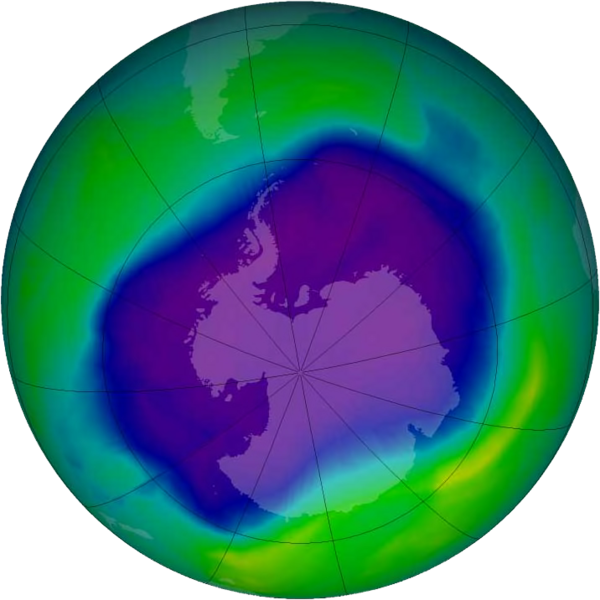 We are all very familiar with global warming, a predicted ecological disaster that we’re still figuring out how to deal with (and also struggling to convince some people of its existence and importance). But if you’re a bit older, you might remember that there was another quite talked-about ecological disaster caused by humans: the depletion of the ozone layer (sometimes people conflate global warming and ozone depletion but they are two different phenomena caused by different types of man-made pollution). Back when I was a bit younger it was big news. UV rays are nothing to be trifled with. So why did we stop talking about it? Whatever happened to the hole in the ozone layer?

What is ozone, and why is it important?

Ozone is simply a molecule of oxygen composed of three oxygen atoms (O3) instead of the usual 2 for atmospheric oxygen (O2). There is, in fact, very little of it in the upper layers of the atmosphere (if you were to compress all of the O3 into one layer at sea-level pressure it would only be 3mm thick) but it plays a very important role. The ozone layer protects us from Ultra-violet(UV) light. Which is the light that has a wavelength shorter than the light visible to humans but longer than x-rays.

As UV light is composed of short wavelengths it is very energetic. It can damage eyes and increase the risk of developing skin cancer.

Ozone is formed in the upper reaches of the atmosphere as part of the ozone-oxygen cycle. After molecular oxygen (O2) absorbs a ultraviolet photon it splits (more correctly it photo-dissociates) into two single atomic oxygen radicals (these are atoms with a unpaired electrons which makes them very reactive). These two radicals react with two oxygen molecules to form 2 molecules of ozone, O3. The ozone molecules will absorb UV light and then split back into a molecule of O2 and a single oxygen atom. The single oxygen atom can then go on to form more ozone.

Ozone was first recognised as a distinct substance by Christian Friedrich Schönbein in 1840 but the layer of ozone in the atmosphere was discovered in 1913 by Charles Fabry and Henri Buisson, two French physicists. G.M.B. Dobson, a British physicist, studied the properties of Ozone in detail and also created the first atmospheric ozone measurement device, the Dobson ozone spectrophotometer. The unit used to measure atmospheric Ozone is named the Dobson in his honour.

What is ozone depletion?

Ozone depletion refers to two phenomenona. The observed year-on-year decrease of atmospheric ozone and the (much larger) decrease in ozone in the polar regions during springtime especially over Antarctica (the ozone hole). We’ve established what ozone is and why it is important. But why was it decreasing?

Chlorofluorocarbons (CFCs) are organic compounds formed of only chlorine, fluorine and carbon. They are incredibly useful in a large variety of applications as they are not flammable, they have low toxicity and are very non-reactive. They were mostly used as solvents, aerosols, propellants and refrigerants (the fluids used in a refrigeration cycle: the stuff that makes your fridge cold).You might recognise the trade name of a CFC refrigerant: freon.

CFCs are generally non-reactive. However, light can cause the CFC molecule to shed a Chlorine free radical.

Ozone can be destroyed by free radical catalysts which include the hydroxyl radical (OH), the nitric oxide radical (NO), atomic bromine ion (Br) and atomic chlorine ion (Cl). You can see what the problem is.

Cl radicals are very long lasting in the atmosphere and catalyse ozone into O2. Bromine, which was occasionally added to CFCs, is an even stronger catalyst.

The non-reactivity of CFCs is an advantage in industrial applications but it also means that they can survive in the atmosphere for a very long time: decades if not centuries. Their longevity is what makes them so dangerous.

The discovery and the industry fight-back

In the early 1970s it was first observed by James Lovelock that CFCs produced since their invention in the 1930s until that day were almost all still present in the upper reaches of the atmosphere. In 1974 Frank Sherwood Rowland and Mario Molina suggested that CFCs acted similarly to NO particles and contributed to ozone depletion. The response of the CFC manufacturers was swift and negative. Dupont, manufacturer of Freon and about 1/4 of all chlorofluorocarbons, took out full page advertisements in newspaper discrediting the pair’s findings.

Chairman of Dupont, commenting on the ozone depletion theory in 1975 (as quoted here)

The aerosol industry tried their best to influence the press by issuing a series of press releases including one that said that ozone depletion was just a theory and not a fact. Sounds familiar?

The tactics used by the CFC manufacturers are not unlike those used today to discredit global warming by oil companies and car manufacturers and others parties that would lose money to regulation. These included stressing the economic cost of regulation, using non-peer reviewed sources as fact and ignoring peer-reviewed conclusions supported by actual data.

However, in the few years after Rowland and Molina’s paper scientists found more and more overwhelming evidence of ozone depletion and in 1976 CFCs were indicated as agents in the thinning of the ozone layer in a United States. The US, Canada, and Norway banned CFC aerosols in 1978.

In 1985 20 nations signed the Vienna Convention for the Protection of the Ozone Layer which pledged to protect the environment from the effects of CFCs but it did not set legally binding goals of reducing chlorofluorocarbon use.

Just a couple of months after signing the agreement a paper by three british scientists called “Large losses of total ozone in Antarctica reveal seasonal ClOx/NOx interaction” shocked the world by first detailing the ozone hole. During antarctic springtime (from September to December) over 50% of the ozone over the pole is destroyed. Polar stratospheric clouds, which form during the antarctic winter, greatly increase the effect of CFCs on ozone.

This new discovery focused the public’s attention on the ozone crisis once again and in 1987 the Montreal protocol, a protocol to the previous Vienna Convention of the Ozone Layer, opened for signatures. Eleven states had signed it by the time it came in force in 1989 and it has now been ratified by 197 nations (the latest country to sign it is South Sudan, which ratified it in 2012).

The protocol legally bound its signatories to the phasing out of use and production of ozone-depleting substances. Nowadays CFCs are not manufactured anymore.

Since the introduction of the Montreal protocol the amount of CFCs in the atmosphere (and other substances harmful to the ozone layer) has decreased. The ozone layer has not yet fully recovered, and the ozone hole is still there, but ozone levels are expected to reach 1980 levels by 2050 or 2075. It’s going to take a while but the damage will eventually be undone.

And that is why you don’t hear about the hole in the ozone layer anymore, because we kind of fixed it, or at least, we are in the process of fixing it.

Rowland and Molina (and Paul J. Crutzen, who discovered the effect of NO on ozone a few years before) won the 1995 Nobel Prize in chemistry for their work on ozone depletion.

The ozone hole (and acid rain) are often touted by global warming deniers as examples of environmentalist scares that we eventually stopped caring about. But in fact, these two are examples of what we can achieve by regulation and international co-operation, by putting the interests of all humanity in front of the interests of those who benefit from the current, unsustainable, status quo.

We can learn a lot from how we handled this ozone depletion issue, let’s hope we do.