Blog post How to take the perfect penalty kick 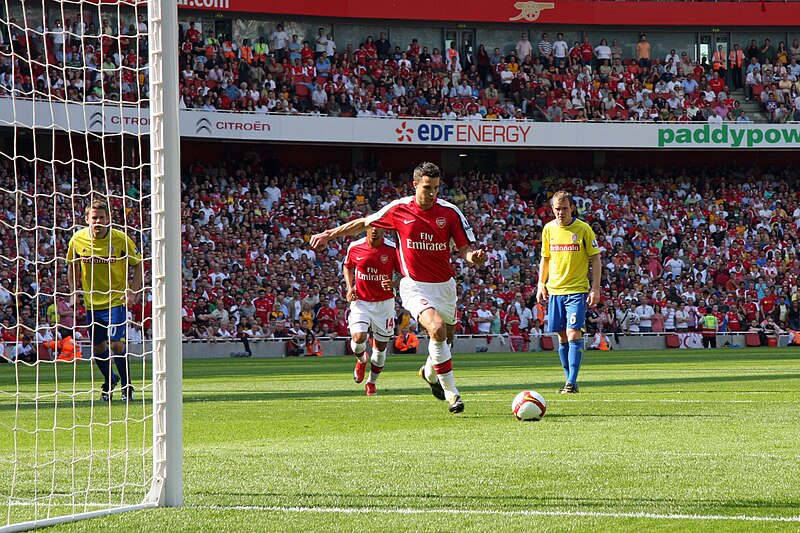 Can you guess which way van Persie is about to kick? – Photo Credit: Ronnie Macdonald

The Champions League final is coming up and there’s a chance that it will go to penalties. Will the teams have studied the behaviour of the keepers and the penalty takers of the opposing team? Have they inferred a trend? Will it even help at all?

Game theory is a branch of mathematics that studies decision making. In the case of penalties, the outcome of the penalty is decided both by the actions of the keeper and the actions of the kicker. It’s also a zero-sum game, if one wins, the other loses.

Penalty kicks are similar to a classic game theory example, the matching pennies game, in which the best strategy to pursue is a ‘mixed strategy‘, that is, choosing at random.

However, football players have a ‘natural’ side. A right footed player will be much more comfortable, and likely more accurate, kicking the ball to his left. Vice-versa for a left-footer. Therefore, the perfect strategy would be to kick the ball to your preferred side slightly more than to your non-natural side, as you’re more likely to miss on the ‘wrong’ side. It turns out that players, in general, do follow this strategy (see Chiappori, 2002).

Of course, the game theory analysis only applies if the keeper and kicker are making their decision independently. But what if one of the players can predict and react the other player’s decision?

An analysis of every single World Cup penalty shootout has produced some interesting results. Goalkeepers, when their team is losing, dive to their right 71% of the the time. If they’re ahead or drawing, they dive to the left and to the right an equal number of times. Why? Is there more to it than just game theory?

It turns out that favouring a direction is not a trait unique to goalkeepers. For example, dogs wag their tail to the right when approaching their master. When some animals see something they really want they favour going right, just like most people tilt their head to the right when leaning in for a kiss.

It is likely to be an evolutionary advantage. For example, when chased by a predator it is advantageous for multiple individuals of the same species to favour one direction over another.

So it seems that when their team is losing, and they have a very good chance of being a hero, keepers fall back to this instinctive behaviour.

G.Diaz of UT Austin recorded footage of hundreds and hundreds of penalties taken by three college football players on a scaled down pitch. He then showed amateur football players the footage up to the point where the kicker hit the ball. About 50% of people were really bad at predicting which direction the kicker was kicking the ball. The other half were surprisingly good at it, as they were able to read the hints given by the body language of the kickers. Where they put their standing foot, how their arms balanced their body, etc. These were all clues that could be read to guess consistently where the kicker was going to place the ball.

So maybe the keepers that are well known to be good at saving penalties (like Helmuth Duckandam who saved all 4 Barcelona penalties during the 1986 Steaua Bucharest European Cup triumph) are so because they’re able to guess the direction of the kick from the kicker’s body language.

But what if you were taking a penalty? Of course, hitting the ball very hard in one of the top corners of the net will ensure that the keeper has no chance, but it is also risky.

Mario Balotelli who, so far, has not missed a single penalty in his career, scoring 23 out of 23, doesn’t know where he’s going to kick the ball beforehand. He takes a short pause just before hitting it, looks at keeper’s body language, understands which side the keeper is going to dive in and kicks the ball in the opposite direction. When he was at Manchester City, Joe Hart, probably one of the best goalkeepers in the world, only managed to save a single Balotelli penalty during training. Joleon Lescott said:

“Joe doesn’t usually get near them and he’s one of the best keepers in the world. In fact, when he eventually did save one, he ran around shouting as though he’d won the World Cup!”