Blog post Should you rinse soapy dishes – How soap works

Should you rinse soapy dishes – How soap works 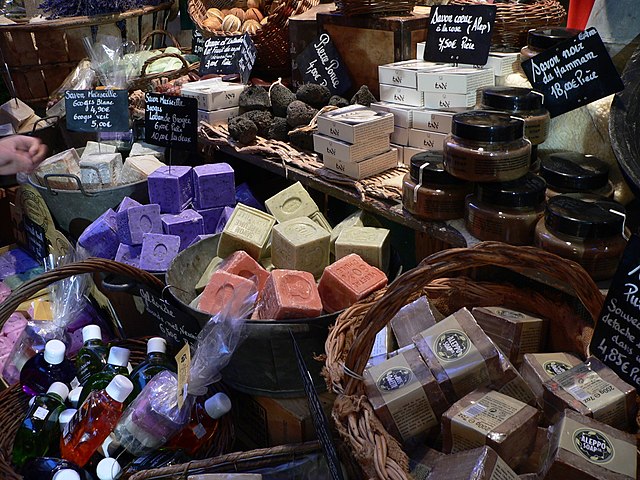 I’ve been traveling in the past few weeks, as you may have noticed from the lack of articles. This week I’ve been visiting friends in Germany.

To be a good guest, and less of a burden on my hosts, I’ve been helping out with the daily chores, including washing the dishes.

And, as it turns out, my friends and I are split into two camps. Those who rinse dishes after soaping them up and those who don’t.

And to show you how those in the second camp are clearly and utterly wrong, we first need to understand how soap (or detergent) works.

Soap has been around for a very long time, at least since Babylonian times. The earliest archeological record of soap use was in ancient Babylon, in 2800 BC. Soap was also produced by the Romans, the Chinese and by Arabs during the middle ages. In fact, one very important ingredient in making soap, alkali, takes its name from the arabic al-qualy, meaning ashes. Soda ash (Na2CO3) was often used in making soap and it is usually extracted from the ashes of plants.

Soap is so useful because it allows fats and oils to became soluble in water. Fats are non-polar and water is polar (a molecule is polar when its electrons, and their electric charge, are not distributed evenly), and hence they don’t mix well at all.

Chemically, soap is a salt of a fatty acid. It is produced by mixing fats and a strong alkaline solution like sodium hydroxide (NaOH). The type of fat and alkaline solution used will determine the properties of the soap. For example, soaps made with animal fats, which contain mostly sodium stearate (which has a carbon chain composed of 18 atoms of carbon), will be very hard and insoluble.

Sodium based soaps are usually quite firm while potassium based ones are soft and sometimes liquid. Palmolive (a soap made with, you guessed it, a mixture of palm and olive oil) was introduced in the late 19th century and became the biggest selling soap by the beginning of the 20th century.

However, when in contact with hard water (water containing high levels of calcium carbonate) soap reacts and instead of forming a lather it precipitates out of solution (the white solid formed is called soap scum). To solve this problem detergents were developed, they are made of (usually) alkylbenzenesulfonates, which have similar properties to soap but are soluble in hard water.

How does soap work?

Soap is able to dissolve fat in water because one end is highly polar and the other is highly non polar. The carbon chain originally part of the fatty acid is hydrophobic (water repellant) while the “alkali” end is hydrophilic (water soluble).

When dissolved in water these soap chains form micelles, which are spherical structures. On the inside of this structures the non-polar ends traps a fat particle while on the outside the polar end can easily dissolve with water. They basically form a little tiny water-soluble cage for fat particles.

These structures are suspended in water. This solution of soap, fat and water can then be rinsed away.

If it is not rinsed away the fat particles stay where they are. The soap too. The water eventually evaporates and all you have left is soap and fat (which is no longer inside micelles as these only form when there is water present).

So you must rinse your dishes! Otherwise next time you use them you will eat your food on a nice layer of old fat and soap.