Astronomy Is the ‘supermoon’ really super?

Is the ‘supermoon’ really super?

Just a week ago, the whole internet was getting ready for the supermoon, a full moon that is slightly (ever so slightly) bigger than usual. But there is really nothing special about ‘supermoons’, it’s just an astronomical coincidence that is practically impossible to notice. To the naked eye it does not look any different.

What exactly is a ‘supermoon’?

The moon travels around the earth in an elliptical orbit. It takes 27.5 days to complete its orbit and, on average, the moon is at a distance 385000 km from the centre of the earth. Since the orbit is elliptical this distance changes throughout the 27.5 days. On average at its closest (at its perigee) it is 362 thousand km away and at its furthest (at its apogee) it is 405 thousand kilometres away. The half of the moon facing the sun is always illuminated. But as the moon orbits the earth, and the earth orbits the sun, the amount of the lit surface viewable from earth changes. When the moon is exactly in between the sun and us, the side facing us is dark and we can’t see a moon in the sky, this is called a new moon. When the earth is between the moon and the sun, from the earth you can see the whole illuminted side and this is called a full moon. The diagram below shows how the various phases of the moon are affecte by its position relative to the earth and the sun:

A ‘supermoon’, which is actually a concept found in astrology, not astronomy, happens when the full moon coincides with the moon’s perigee. So yes, the moon will be slightly bigger in the sky, but not by very much. Considering how little it is when viewed with the naked eye, it is simply impossible to notice any difference.

Animation of the moon showing the changing phases, as seen from the northern hemisphere.

On June 23rd, the perigee of the moon and the maximum full moon happened only 20 minutes from each other, which is really quite close. The moon was about 357000 kilometres away and was 15% bigger than when it’s at its furthest orbital point. However, the full moon in May was just 359000 km away from earth and the next one, in July, will be once again be 359000 km away. It’s not like you can go and look at the full moon every month and notice a difference of less than 2%. Even a difference of 15% is hardly noticeable. As Neil deGrasse Tyson said, it’s like the difference between a 15″ and a 16″ pizza. Sure, the second pizza is bigger, but you’re not going to notice unless you take out a tape measure and start measuring.

How big is the moon in the sky?

The moon is really really tiny, and pictures of it looking huge are either photoshopped or taken with telescope-level zoom.

But how small is it? Take for example, a one pound coin (22.5 mm in diameter). How far away from your eye would you have to hold it so that it would be the same size of last month’s full moon in the sky? Quite far in fact, over two metres. Really, really tiny.

The astronomer cannot prevent himself from seeing the moon larger at its rising than some time afterwards, although he is not deceived by this illusion.

The moon at the horizon always looks bigger than the moon in the sky, when in fact it is slightly further away from us than when it’s directly at the zenith. It’s an illusion, and one that has been noticed and written about since ancient times. The reasons why the moon appears to be bigger are still debated (here’s a paper on the subject and here’s the wikipedia link). 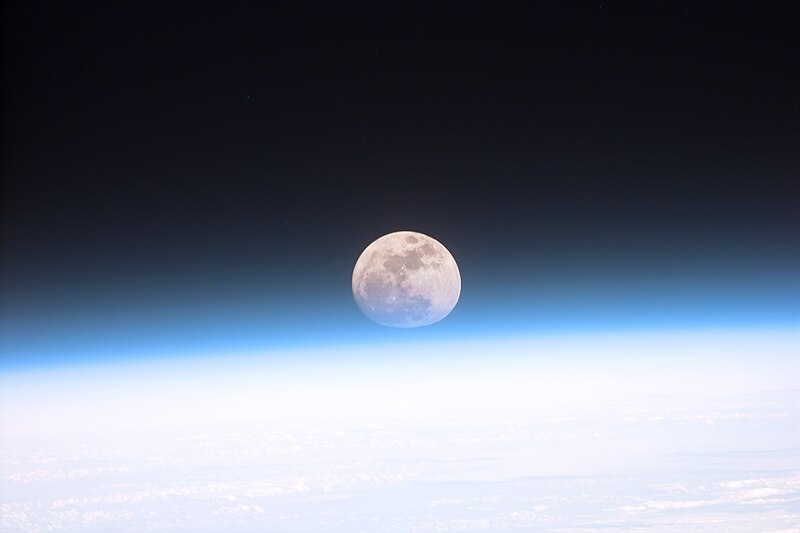 Moon partially obscured by the earth’s atmosphere. Taken from the Discovery Space Shuttle

So why is the supermoon such a big deal? Why do we need a silly excuse to go out and look at the full moon? The moon is awesome all the time. When I look at it, I’m still sometimes amazed that humans have walked on it. That as a species we have managed to travel through empty space and land on a piece of rock 3500 km wide over 350000 km away. It’s mind boggling.

If you’re interested in astronomy have a look online for amateur astronomer groups in your area, there are lots of people that meet up, bring their own telescopes and look at the sky.