Blog post Paralysed and unaware of it – Brain lesions and anosognosia

Paralysed and unaware of it – Brain lesions and anosognosia 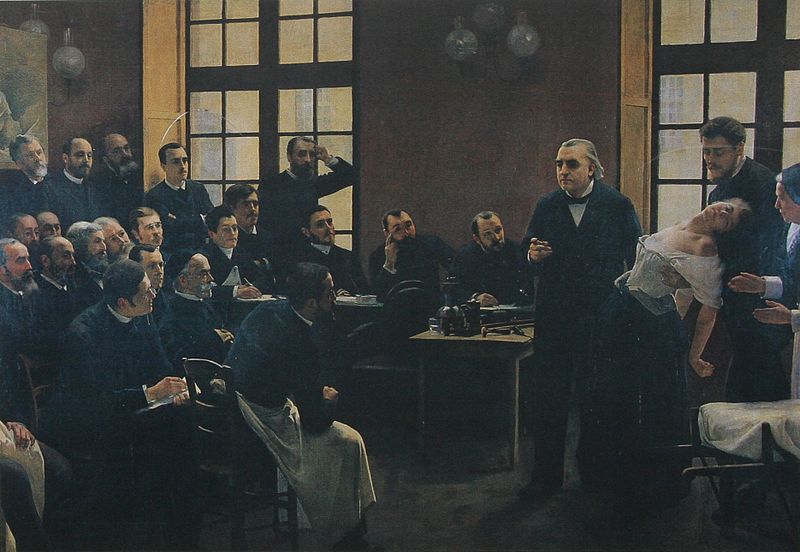 Joseph Babinski, coiner of the term “anosognosia“, holding a ‘hysterical’ woman during a demonstration (top right). Painting by André Brouillet (1887)

The term anosognosia was coined by Joseph Babinski, a prominent French-Polish neurologist. Gnosos in Greek means knowledge while nosos means disease. The a- is a negative prefix. It literally means lack of knowledge of one’s disease.

In 1914 Babinski had two patients that had left severe hemiplegia. The whole left half of their body was paralysed. Their left leg, their left foot, the left half of their chest, the left half of their face. But what was particularly interesting is that the patients were unaware that they were paralyzed. They just didn’t know. He described one poatient as having full mental facilities. She could talk clearly, had no delusions and could remember things well. However, as Babinski wrote on June 11, 1914 to the Neurological Society of Paris:

What did contrast with the apparent preservation of intelligence of this patient was that she seemed to ignore the existence of a nearly complete hemiplegia, which she had been afraid of for many years. Never did she complain about it; never did she even allude to it. If she was asked to move her right arm, she immediately executed the command. If she was asked to move the left one, she stayed still, silent, and behaved as if the question had been put to somebody else.

Patients with anosognosia due to hemiplegia are not only unaware of their paralysis but will also create ridiculous excuses to justify the reality of their situation. When asked to pick up a pencil with their paralysed hand, they’ll often say that they’re “too tired” or that they “don’t need a pencil”.

This poses the question: are anosognosic patients really unaware of their condition on a physiological level, or is it simply psychological denial? After all, we humans are incredibly apt at ignoring things we don’t like or which don’t fit with our world view. Some people go to great lengths to avoid cognitive dissonance, ignoring the reality that is staring them right in the face. Sure, anosognosia is a result of physiological damage to brain structures. The injury is physical, not psychological. But is the lack of awareness physiological or psychological, or both?

Most famously, and rather controversially, US president Woodrow Wilson is thought to have suffered from anosognosia after a stroke in 1919. His whole left side was paralysed but he did not seem to be aware of his condition. The question is: did the anosognosia affect his personality or his decision-making at all? Was he just unaware of his paralysis but was otherwise fine? According to some historians, his wife, Edith Bolling Wilson, became the de facto president of the United States, as Wilson, in his condition, was unable to fully operate in his capacity as president. There are even some suggestions that if Wilson’s condition had not been covered up by his wife, his doctor, and the white house staff, World War II would have never happened. But that’s, of course, just speculation. 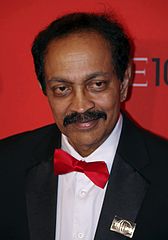 VS Ramachandran and his awesome moustache – Photo by David Shankbone

Vilayanur Subramanian Ramachandran, a neuroscientist whose great name is matched by the awesomeness of his moustache, and has been called “a latterday Marco Polo, journeying the Silk Road of science to strange and exotic Cathays of the mind” by Richard Dawkins, has attempted a unified explanation of anosognosia. In a 1996 paper and in his 1998 book Phantoms of the Brain (co-written with Sandra Blakeslee) he suggests that the left side of the brain is the side responsible for keeping one’s mental model of the world intact using rationalisation, denial and repression of unpleasant memories. The right side of the brain plays “devil’s advocate” or works as an “anomaly detector”, it keeps the left brain in check by constantly comparing the left-brain’s conclusions to reality. An injury to the right side of the brain causes the left brain to run amok unchecked, causing the patient to become more and more delusional. It’s an interesting idea.

Though anosognosia was originally used to describe the lack of awareness of one’s paralysis in patients with left hemiplegia, the term has since been used to describe lack of awareness of a condition in patients with brain damage. For example, sufferers of receptive aphasia, a condition that causes language impairment, seem to be unaware that they’re speaking gibberish. They can’t understand other people or make themselves understood, but they’ll nod and smile when trying to converse. They’re babbling, but they don’t appear to be aware that they are.

VS Ramachandran, in an interview with Errol Morris, recounts his meeting with an elderly Indian patient who adamantly denied that her left arm belonged to her:

So I asked her, “Can you move your right arm?” and the usual list of questions, and she said “Yes, of course.”  I said, “Can you move your left arm?”  She said, “Yes.”  “Can you touch my nose?”  “Yes, I can touch your nose, sir.”  “Can you see it?” “Yes, it’s almost there.”  The usual thing, O.K.?  So far, nothing new.  Her left arm is lying limp in her lap; it’s not moving at all; it’s on her lap, on her left side, O.K.?   I left the room, waited for a few minutes, then I went back to the room and said, “Can you use your right arm?”  She said, “Yes.”  Then I grabbed her left arm and raised it towards her nose and I said, “Whose arm is this?”  She said, “That’s my mother’s arm.”  Again, typical, right?  And I said, “Well, if that’s your mother’s arm, where’s your mother?”  And she looks around, completely perplexed, and she said, “Well, she’s hiding under the table.”  So this sort of confabulatory thing is very common, but it’s just a very striking manifestation of it.  No normal person would dream of making up a story like that.  But here is the best part.  I said, “Please touch your nose with your left hand.”  She immediately takes her right hand, goes and reaches for the left hand, raising it, passively raising it, right?  Using it as a tool to touch my nose or touch her nose.  What does this imply?  She claims her left arm is not paralyzed, right?  Why does she spontaneously reach for it and grab her left arm with her right hand and take her left hand to her nose?

What Ramachandran is implying is that the patient had to know, on some level, that she was paralysed. Maybe she did not consciously know it, but using her right hand to lift her left hand means that her brain had to know that her left hand wasn’t going to do it on its own.

Much like the Donning-Kruger effect if you are affected by anosognosia, you can’t really know if you are. This can be a problem, as patients refuse or don’t seek care. To them, the problem does not exist.

But what about the rest of us, are we all anosognosic on some level? Are there things we ignore but don’t know we are ignoring (unknown unknowns, as Donald Rumsfeld would call them)? Our brains have not necessarily evolved to answer these questions. Maybe we will never know because our brains are simply not capable of that kind of introspection and awareness. Maybe we’re just not wired that way. After all, the brain is a hugely complex organ and maybe, to fully understand it, we need something more complex than itself to understand it. But alas, our brain is all we have.

Of course, that’s not saying that our brain is not incredible and the fact that we’re self-aware and can investigate our own self-awareness is not, almost literally, mind-blowing. But maybe it’s not powerful enough to comprehend itself. We can’t know if we will ever understand but, for now, we just have to keep looking.

Unskilled and unaware of it – The Dunning-Kruger effect

VS Ramachandran: 3 clues to understanding your brain