The oldest surviving sea-washed lighthouse, the Bell Rock Lighthouse is a triumph of engineering and persistence.

There is a reef, off the coast of Scotland, called Bell Rock. Legend has it that an Abbot, in the 14th century, managed to install a giant bell on the reef, warning seafarers of the danger. However, a dutch pirate stole the valuable brass bell just one year after it was installed and ironically perished when his ship hit the then-unmarked rock some time later.

Hundreds and hundreds of sailors lost their lives on the rock in the following centuries and at the early 1800s it was decided that something had to be done. The Northern Lighthouse Board appointed John Rennie and his young assistant Robert Stevenson in charge of building a lighthouse on top of the rock.

No one had ever built a lighthouse where so much of it was going to be submerged. The tip of bell rock only broke the waves for 4 hours a day due to the tide.

Robert Stevenson decided that he was going to design the lighthouse himself with as little involvement of John Rennie as possible. Though he was younger, he felt he knew a lot more about building lighthouses since he had already built a few.

Detail of the first course of stones

The whole project took almost 4 years, from 1807 to 1810. At the beginning, the workers lived on a boat moored about a mile away from the site of the lighthouse. Then, a beacon house was built next to the site, supported by wooden stilts. The workers, and Stevenson himself, were at sea for months at a time. Work on the site stopped during the winter, allowing the stonemasons to carve the stones out of Aberdeen granite.

For the foundations, a 60 cm deep, 12 metres wide hole had to be carved out of the rock by pickaxe, as Stevenson was worried that explosives would damage the structural integrity of the rock. The rock got harder the deeper they dug, and there was one man whose sole job was to replace broken pickaxe handles.

Then, Stevenson decided to build a 100 metre railway. Yes, a railway. On a rock in the middle of the sea. It seems rather useless, but it was the easiest way to cart the building materials, including the huge 1-tonne precisely-cut chunks of granite, from the various landing stages to the building site. Dragging the materials along the spiky, uneven surface of the rock would have been a lot harder. The workers built various-sized forges along the way and as much as 60 men were working on laying down the track at any one time. 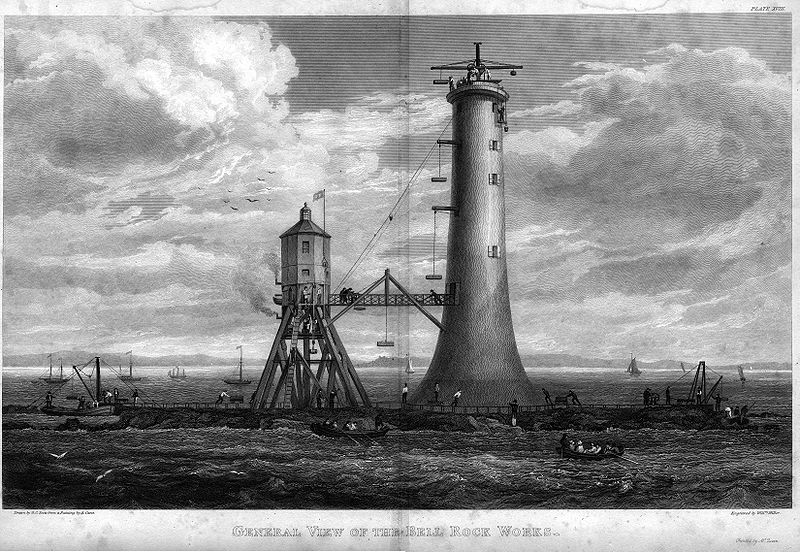 Engraving of the Bell rock works. The beacon house, constructed on wooden stilts, is on the left

The first layer of stones were specifically cut to follow the shape of the uneven rock of the dug-out foundation. Hundreds and hundreds of huge granite stones were slowly laid on top of each other. Progress was stilted by bad weather, which occasionally devastated the beacon house. It had to be rebuilt several times. A shipping embargo also hampered progress. To avoid interference from John Rennie, who was not on site, Stevenson mailed him lots of letters asking for advice for very particular problems. He then promptly ignored Rennie’s suggestions.

The last stone was placed in July 1810, the light room was completed in October, but the lighthouse was finally turned on for the first time in February 1811. 2 men died during the construction. 2835 stones were laid.  It stood 35 m high and its light could reach up to 50 km inland.

Today, over 200 years later, it is still standing. It does not have keepers anymore, it’s been fully automated since 1988, but the quality of the masonry and the design was so excellent that no modification have ever been necessary, even though it has been battered and sprayed by the stormy scottish seas for over two centuries.

Robert Stevenson’s three sons also became lighthouse engineers. However, his grandson, Robert Louis Stevenson greatly saddened his family by not pursuing engineering but merely becoming one of the most famous authors of his time.