Biology Where do cashews come from and why are they so expensive?

Where do cashews come from and why are they so expensive?

I quite like cashew nuts, they’re tasty even if they’re not drowned in large quantities of salt. However, they’re kind of expensive, at my local supermarket they cost 3-4 times more than peanuts. Why? 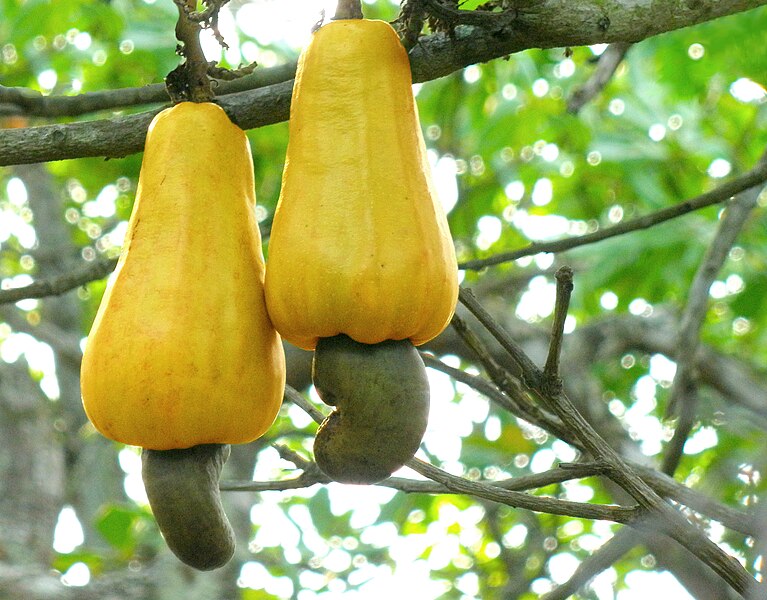 Where do cashews come from?

The fruit pictured above is a cashew apple, hanging at the bottom of it is a cashew nut. The nut is, botanically, the seed of the fruit and each apple will only produce one. Each nut has to be manually collected from each fruit and then set to dry.

However, once dried, much care has to be taken in shelling the seeds. Stored in a honeycomb structure between the soft outer shell and the hard nut there is a liquid called CNSL (cashew nutshell liquid) which contains anacardic acids which cause severe skin rashes. Therefore, before shelling the seeds have to be roasted, so that the toxins are destroyed. This must be done outside, as the process releases gases that can severely irritate the lungs, sometimes fatally.

The nuts are then opened up and graded. This labour-intensive process, coupled with a short supply, is why cashews are much more expensive that peanuts.

The toxins in the cashew shell cause urushiol-induced contact dermatitis, a painful skin rash. In fact, it is the same rash produced when skin comes in contact with poison ivy. Cashews and poison ivy (as well as mangoes and poison oak) are all part of the same botanical family, the Anacardiaceae.

The cashew nutshell liquid is used in a variety of applications. It is used to treat tooth abscesses as it is very toxic to a range of gram-positive bacteria. It has a wide variety of industrial applications such as a binder for friction ingredients for brake pads and clutch disks. It is also “used in moldings, acid-resistant paints, foundry resins, varnishes, enamels and black lacquers for decorating vases, and as insecticide and fungicide.” (Bass, 2013)

The cashew apples are rich in vitamin C, containing three times as much as oranges. They are used to make jam, fermented into alcoholic drinks (an example is feni, made in the Indian state of Goa) and as a curry ingredient.  They are quite popular in south America, possibly even more than the cashew nuts. In Brazil, where cashews originate, they are sometimes used in cocktails.