Biology The hippo’s closest relative is the… dolphin?

The hippo’s closest relative is the… dolphin? 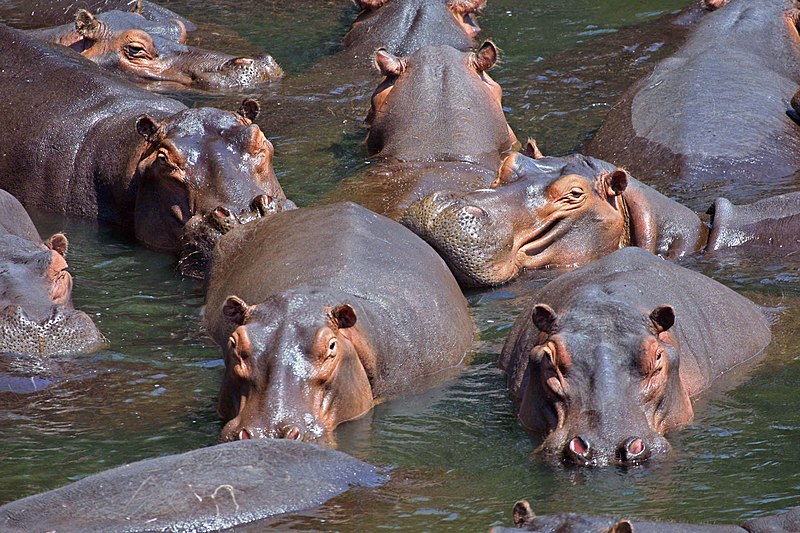 The hippopotamus is the third largest land mammal after elephants and rhinos. They are semi-acquatic and spend most of the day immersed in shallow pools of water or rivers which keeps them cool. When it’s less hot, during the night, they leave the water to feed. Hippos also produce natural sunscreen that is secreted though their skin that absorbs light in the UV range and also acts as a bacteria inhibitor.

Hippos might look cute but they’re known to be very aggressive and kill far more humans than lions. The worst position to be in is between a hippo and the water. Since the water is where it’s safe, it will feel threatened and will charge.  You don’t stand much of a chance against a 2000 kg adult hippo that can sprint at up to 30 or 40 km/h. It’s bigger and faster.

The night-time is quite dangerous, as they leave the water to graze. They occasionally eat other plants, but most of their diet consists of grass. Because they like to take the same route when going to graze they create vegetation-free paths and cause the soil to sink a bit. Over time, they can divert river channels and swamps.

The name hippopotamus literally means “water horse” in greek. Naturalists used to group them together with elephants and rhinos in the order of pachiderms, literally “thick skin”, but this definition is now obsolete as these animals are not very closely related. For the longest time people thought that the closest relative of the hippo is the pig, after all they look a bit simililar.

However, recent DNA evidence has shown that hippo’s closes relative is *drumroll* the dolphin. Well, not just the dolphin, it’s related to all cetaceans, so to porpoises and whales as well.  A common ancestor of whales and hippos split from the other ruminants (order ruminantia) and subsequently hippos and cetaceans diverged about 55 million years ago.

Hippos give birth, mate, sleep and defecate in water. What’s quite interesting is that there is a fish, called tilapia, that lives in symbiosis with hippos. By eating their poop. They feed on the hippos’ refuse, keeping the water clean, and also ‘massage’ the hippos. They eat away old skin and growths.

The notorious drug lord Pablo Escobar had imported four hippos from Africa to Colombia for his exotic animal collection. After Escobar was captured the hippos were not sent back as it was deemed too costly. They eventually escaped and started breeding. There are now at least two dozen of them roaming the colombian forest.

While the hippo is quite dangerous and does kill a lot of humans, it is not the most dangerous african animal. The anopheles mosquito can trasmit malaria to humans when bitten, which kills up to 2000 people a day according to the World Health Organisation. And of course, the other more dangerous animal is the human. Behind a steering wheel.