Biology If humans ran on electricity, for how long would we need to plug in every day?

An adult human male needs about 2500 Calories a day to power his metabolism. A calorie (with a lower-case c) is an archaic unit that, unfortunately, is still used today for food energy (we often talk about the caloric value of food, for example) and it is defined as the amount of energy needed to heat up one gram of water by one degree Celsius. One calorie is approximately 4.18 joules (yay for SI units!) and one Calorie (with an upper-case C) is 1000 calories and therefore equivalent to 4.18 kiloJoules.

Which means that an adult male needs 10.5 megaJoules of energy a day!

So how long would we need to be plugged in?

This obviously depends on how fast we could charge ourselves: how much power we could draw.

Let’s do some comparisons. A hairdryer or other high-power consumption appliances (like washing machines) can draw up to over 2000W of power. My iPhone charger supplies 5 watts, and my computer’s charger 45 watts, though computer chargers can go up to 150-200 W. A desktop power supply is in the range of 500-1000 watts. Electricity in the UK is supplied at 230 V with a maximum socket current of 13 A, which means that the max power draw is 2990 W. In the United States, electricity is supplied at a lower voltage (120 V) and the maximum current output is usually 15 A, which gives a max power draw of just 1800 watts.

Time for some calculations. If you were able to draw maximum power from a UK socket it would just take 58 minutes to get enough charge for a day. In the US, it would take longer, 1 hour and 29 minutes. But what if you used a laptop charger? A 150 W laptop charger would take over 19 hours. I’d imagine it would be terribly boring having to be plugged in for most of the hours of the day. My laptop charger, with its measly 45 W of power, would not supply enough energy for me to live on. It would take 2 days and 16 hours to give me enough energy to live for one. An iPhone charger would take over 24 days!

A 150 W laptop charger would take 19 hours to give you a day charge.

If you’re lucky enough to have access to one of those 10 kW Tesla car chargers, it would take less than three minutes. 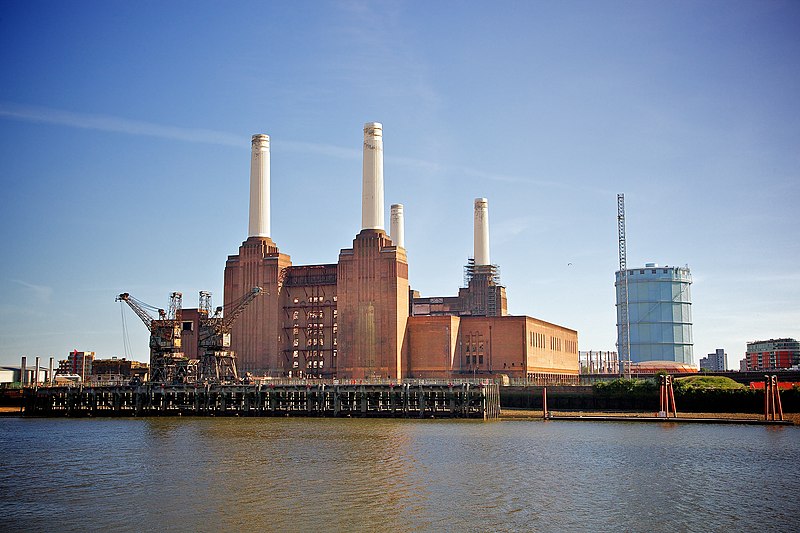 The iconic Battersea power station produced over 500 MW at its peak production. Photo by Aurelien Guichard

This is assuming humans have some sort of battery that they can charge. But what if we could simply stick our fingers in a power socket and absorb energy (FOR THE LOVE OF GOD, DON’T TRY THIS). The maximum power we could draw would depend on the socket’s voltage rating and also the resistance of our bodies (Power =Voltage2 / Resistance).

Determining the electrical resistance of the human body is quite difficult. It varies from person to person and is influenced by the time of day, the dryness of the skin, the amount of adipose tissue, etc. A report by the NIOSH (National Institute for Occupational Safety and Health) states that in dry conditions the resistance of a human body can reach 100 thousand ohm, but when wet, it can drop to 1000 ohm. If the skin is broken, which can happen quickly when subjected to high voltages, the resistance can drop to as low as 500 ohm.

The International Electrotechnical Commission (IEC) gives total body impedance (at 220 V and 50Hz AC current) as, on average, 1350 ohm. Using this figure, the amount of current you can draw (from a UK socket) is ‘just’ 170 mA, and the amount of power is only 39 watts, which means it would take about 3 days to give you a single-day charge. Which is not practical. Even less practical is that, of course, a current of 170 mA would very likely kill you (according to the NIOSH 20mA is enough, see the table below).

How much would it cost to feed on electricity?

Thanks to developments in food production technology, it is easier than ever to eat high-calorie foods, and for probably the first time in history calorie-rich foods are often cheaper than low-calorie ones like vegetables and fruits (which is definitely a contributing factor to the obesity epidemic).

According to Wolfram Alpha, the average tomato weights 117 grams and contains 21 Calories of energy. If I were to eat only tomatoes, I’d need to eat 119 of them or 13.9 kg. Which is a lot of tomatoes (note: I do not recommend you try this). A kg of tomatoes at my local supermarket costs £1.99 so I would need to spend 27.6 pounds (42$)!

Time for salsa (not the dance) – Photo by Jack Gavigan

However, if I could ‘eat’ electricity, I would save so much money. 2500 Calories is equivalent to 2.91 kilowatt-hours, and 1 kWh costs me just 13.5 pence. Eating electricity would cost just 39 pence a day ($0.60)! A wall-outlet Big Mac-equivalent would cost a paltry 8 pence, and it would probably taste better as well. (Side note: if you could convert the energy of a Big Mac into electricity you could charge an iPhone 5 one hundred and four times.)

From a pure energy/cost perspective, cheap vegetable oils (which contain a whopping 9 Calories per gram) and flour are the closest you can get to electricity prices. Corn or sunflower oil cost £1.50 per litre (a litre contains 8145 Calories). You could get the calories you need for just 46 pence ($0.70).

Let’s go a step further what if you could fuel yourself with fossil fuels. A litre of petrol (gasoline or gas in the US) costs £1.36 at my closest petrol station and contains 34.3 MJ of energy (according to Wolfram Alpha). The adult male needs 10.5 MJ a day, so you’d only need to ‘consume’ approximately 0.3 litres of petrol. But, of course, that’s only true if you can harness the gasoline’s energy with 100% efficiency. In reality combustion engines have an efficiency of less than 40% so, if you were powered by a petrol engine, you’d actually need at least 0.75 litres of petrol which would cost £1.02 ($1.56).

Cheaper to stick to vegetable oil.

I’m looking to write more of these “What If?” posts. If you have an interesting question you’d like me to answer, please let me know in the comments!