Blog post How deep is the Sahara? and 6 more interesting facts about sand

How deep is the Sahara? and 6 more interesting facts about sand 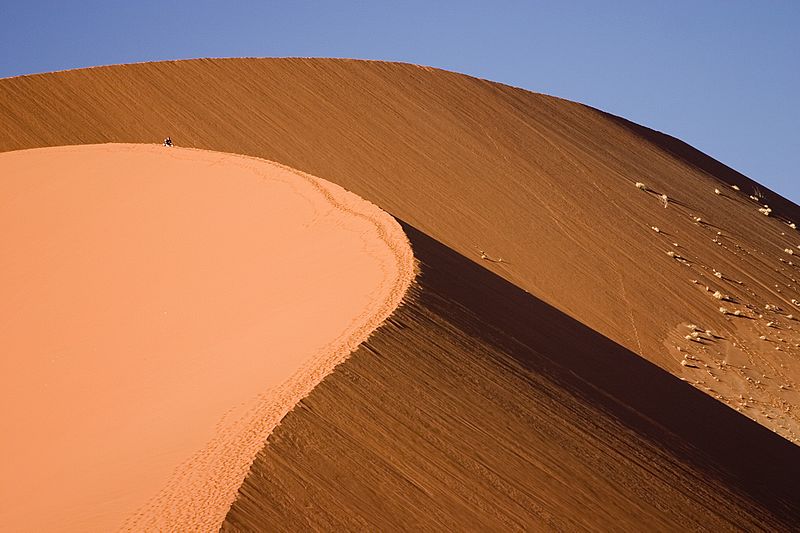 How deep is the sand in the Sahara?

The Sahara is the world’s hottest desert though it’s not the biggest. It’s third in size. The two biggest deserts are, somewhat counter-intuitively, the antarctic and the arctic. Even though they are covered with ice, they are dry enough to be considered deserts.

It’s actually quite difficult to answer this question. We don’t really know how deep the sand goes before the bedrock starts. One estimate gives the average depth of the sand to be approximately 150 metres while the top of the dunes can reach a height of 320 m from the bedrock (170-180 m high measured from ‘sand-level’).

Of course there could be cracks or fissures in the bedrock allowing sand to reach bigger depths but we just don’t know.  Sand dunes move (just like sea-waves in fact, more on that below) shifting the landscape. We know very little about the ocean floor and analysis of sandy depths is even more difficult.

Fraser island in Australia is the biggest sand island in the world. While not completely made of sand, it would not be unreasonable to expect the sand to go much deeper than most deserts. Sand dunes on the island reach almost 250m above sea level.

The Sahara might be famous for its sandy dunes but, in fact, only 20% of it is sand, the rest of it is mostly made up of  bare rock. The largest sandy desert is the Rub’ al Khali (literally ’empty quarter’ in Arabic) situated in the middle of the Saudi Peninsula. It’s huge, 1000 km wide and 500 km long.

Dunes behave very much like ocean waves but in slow-motion. Wind and rain cause the sand surface to ripple. Crescentic dunes in China were measured as moving about 100 metres a year.

It is quite difficult to model this flow of sand. Granular materials tend to behave at times like solids and at times like fluids. Each grain of sand could be in contact with 5 to 9 other grains, and the way they interact, especially on such a huge scale, with millions and millions of them, is really rather complex.

As you can imagine, huge moving dunes can easily swallow up cities and roads. In the past, that’s exactly what they did.

The Garamantes were a civilisation that lived from 500 BC to 500 AD in the north Sahara. They built complex irrigation systems to sustain their cities. They were the first ever urban society in an area of the Sahara not crossed by rivers. Unfortunately for them, the fossil water they relied on dried up and their civilisation collapsed. They fragmented into small chiefdoms and were eventually absorbed by the then quickly growing Arabic world. Their cities were ultimately swallowed up by the desert.

Until recently archeologists thought that they were simply slightly better-off nomads. David Mattingly of the University of Leicester, who has studied the Garamantes says that they “were brilliant farmers, resourceful engineers, and enterprising merchants who produced a remarkable civilization”.

Of course, the most famous lost-in-the-desert city is Ubar, also known as Atlantis of the Sands. Legend has it that this once prosperous city was destroyed by an act of God or natural disaster and then swallowed by the southern Arabian sands. A research team announced that they had found it in 1992. The claim is disputed.

Sand is made of tiny particles of rock and minerals ranging from 0.0626 mm to 2 mm in size. The most common type of sand is fragmented quartz and the second most common is calcium carbonate (main component of limestone), made from the accumulated remains of shellfish and coral over millions of years.

The composition of the sand will determine its colour. For example, beaches in southern Europe are a deep yellow colour caused by the imperfections in the quartz. Tropical white sandy beaches are the result of eroded limestone and, sometimes, crushed coral and shellfish. Sand derived from volcanic rocks (like obsidian) are black. There is one such beach near my hometown. You know how hot sand burns your feet? It’s a lot worse on black, light-absorbent sand.

Building sand castles is a popular beach activity. Some people are happy with a misshapen pile of sand, while others take it very seriously and build huge enormous structures. But what’s the physics behind sand castles?

If not too much water is added to the sand (according to a study 1% of water by volume is the optimal amount), the water forms “bridges” between grains of sand, holding the structure together by surface tension. The less ‘refined’ the sand the better, spiky grains of sand are much better than rounded ones as they can fill the space more efficiently.

If there is too much water between the grains the surface tension is not enough to keep the structure together, the sand grains begin to flow and your beautiful, detailed bust of Megan Fox will collapse into a pile of wet sand.

Magic sand is ordinary sand coated with a hydrophobic (water-repelling) compound. Which means that you can drop in in water, remove it and it will be totally dry! Don’t believe me? Have a look at the video below.

Magic sand can also be used to build underwater sand castles (see “How to Construct the Perfect Sand Castle” in the references).