Blog post Vaccines and Autism: Scientific Mis-Reporting in the Media

Vaccines and Autism: Scientific Mis-Reporting in the Media

Repeat after me: Vaccines. Do. Not. Cause. Autism.

It all started in the late nineties, when a doctor, Andrew Wakefield, published a paper in the Lancet linking the MMR vaccine (measles, mumps and rubella) to autism. In fact, the study did not make this claim at all, the link was announced at a press conference by Wakefield himself. If you know anything about how science works (with peer-reviews publications), you would know that a press conference is NOT the way to announce results, unless of course you want media attention (see the wikipedia article on ‘science by press conference‘).

The media, of course, loves a scare, and began reporting the supposed link between the MMR vaccine and autism as fact.

Now, a few years later, measles has once more become endemic in Britain, and there currently is an epidemic going on in Wales. A 25 year old man who had the disease died, (though doctors are not sure if measles was the sole cause) (source). In developed countries the expected mortality rate from measles is approximately 1 in 1000. All of this would have been preventable if parents had their children vaccinated. In 2003 the vaccination rate in London was as low as 61% (compared to 90%+ before the scare).

Wakefield was found to have multiple conflicts of interest, to have manipulated data and to have broken several ethical codes, by a Sunday Times investigative journalist, Brian Deer . The study was retracted by the Lancet in 2010 and Wakefield was struck off the Medical Register (meaning he can’t practice as a doctor anymore), as he was found by General Medical Council of serious professional misconduct.

Reviews by the Cochrane Institute [1], Centers for Disease Control and Prevention [2], the Institute of Medicine of the US National Academy of Sciences [3] and the UK National Health Service [4] found no link between the MMR vaccine and autism. The Cochrane review looked at data for 14.7 million children and found no link. They conclude that the benefits of the vaccines far outweigh the potential risk.

There has been talk in the last few days of compulsory vaccinations. I’m not sure how I feel about that, but I do think that it should be considered as the moral thing to do to vaccinate your children. There are many people who cannot be vaccinated (such as people suffering from leukaemia), and by not vaccinating your child you are unnecessarily putting them at risk. The vaccine is also not 100% effective, if your child is not vaccinated and gets measles, they increase the risk of vaccinated people as well because these people would not have been exposed to the virus at all. 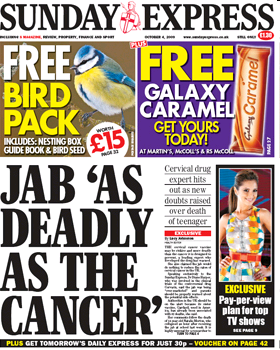 Eat chocolate cos you’re all going to die!

But let’s discuss the role of the media in reporting science. The quality of scientific reporting in major news outlets is poor, if not abysmal. There are a lot of educated, responsible scientific journalists working, but their stories are rarely put under the spotlight.

The scientific stories that are widely reported are usually ones based on bad science, because bad science sells copies. Carrots cure cancer, carrots cause cancer, if you drink you will live longer, etc. are all stories that are based on approximations of scientific studies. If a study says that there is a possible correlation between two phenomena, the link between the two is not fact, yet the media reports it as such.

What they have created is the general idea that science is weird and quirky, and that we should listen to ‘experts’, who more often then not are not actually experts in the field, but just the ones that are willing to give the most outrageous soundbite. Science does not work that way, it doesn’t change ideas every other day because some paid shill says so. It is based on evidence, on peer-review, on the reviews of evidence, etc.

Maybe once people are taught how science works, I’ll stop seeing people posting stupid things on facebook, like “X is the natural fruit that cures cancer, you don’t know about it because the big companies don’t want you to”. First of all, you haven’t heard about it because it doesn’t work, and do you really think that the big pharmaceutical companies would pass up the opportunity to package some fruit and sell it as medicine? It shows the general mistrust of science that some people have, probably because they do not understand it. After all, if what the media dubs as science is “Scientists show that Jessica Alba has the best wiggle“, why would they take science seriously?

It’s a vicious cycle. The media reports science badly, therefore people become less and less trusting of science. Since they are less trusting they are more likely to believe such illogical statements and tolerate worse and worse science reporting.

How can we break this cycle? Better education? Stricter control of the media? Have a nationalised body that reviews the scientific output of the media?

Let me know what you think in the comments,

This week is World Immunisation Week, learn more about it here.

3. Immunization Safety Review: Vaccines and Autism. From the Institute of Medicine of the National Academy of Sciences. Report dated 17 May 2004